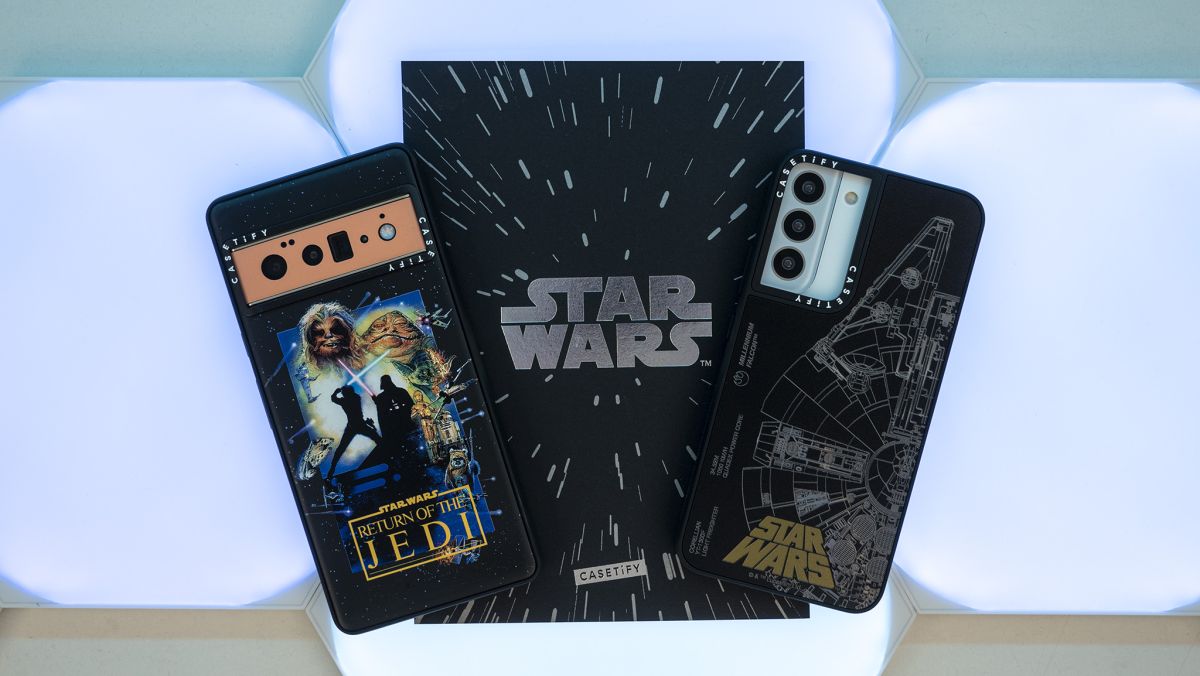 It’s May 4th, which means you’ll find plenty of Star Wars-themed merchandise and promotions everywhere you go. It’s officially Star Wars Day, after all. And even though I have seen and used a lot of Star Wars related items thingfew are as high quality as the limited edition Star Wars cases from CASETiFY.

For the special day, CASETiFY sent me cases for the Galaxy S22+, Google Pixel 6 Pro, and Samsung Galaxy Z Flip 3. Of the three, it’s hard to pick a single favorite, but the Millennium Falcon and Tatooine Binary Sunset cases are up for a tie for me. As my wife said when I slapped the Binary Sunset on her Z Flip 3, it’s “the perfect case for summer vibes.”

Whether you are considering getting one of the many great Star Wars games on sale for the Quest 2 or simply accessorize your Fire TV remotesStar Wars fever is in full swing today.

I’ll start with the Galaxy Z Flip 3 case because it’s the most different of the three cases CASETiFY sent me. As is the case with all Galaxy Z Flip 3 cases, the Binary Sunset CASETiFY case consists of two parts, one that covers each half of the best foldable phone approximately.

Unlike the other two cases, this one is a clear, glossy TPU that features a nifty gel layer inside the edges to absorb the impact of a drop. The power button is also cut off from this case as it is also the fingerprint scanner on this phone. Otherwise, like other CASETiFY Star Wars cases, the volume buttons are completely covered in nice clicky buttons that don’t feel mushy at all – a problem I’ve seen too often with other cases.

Unlike the other two cases in my possession, the Z Flip 3 case has much rounder sides, while the sides of the Pixel 6 Pro and Galaxy S22 Ultra case are much flatter. It adds a bit of bulk to the otherwise very thin phone – that’s when it’s unfolded, of course – but that little bit of extra bulk makes me feel good about accidentally dropping the phone with the case on .

In fact, not a minute after putting the case on the phone, it accidentally fell straight to the floor and didn’t look any worse from wear.

Part of the excellent protection is the lip around the display, which shields it without sticking out so far as to interfere with gesture controls. This is another issue I’ve seen crop up in other cases and it’s infuriating to deal with it after spending money on one.

Next up is the Millennium Falcon case for the Samsung Galaxy S22+. It looks more like a “normal” case at first glance, but a slight tilt into the light reveals a beautiful dual-layer case that literally highlights the beautiful intricacies of the Millennium Falcon layouts on the back. The underlay is a nice shiny silver material for everything except the part of the Star Wars logo which is matte gold.

I especially liked the small details and specs etched into the back. The Millennium Falcon is all about speed and CASETiFY recognized that by etching the craft’s exact speed into the measurements on the case. This back part is a textured plastic different from the material used for the sides.

Those powdery, rubbery, mostly flat sides feel great to hold and make the case feel sturdy in the hand. CASETiFY sticks with a more rectangular camera cutout on the back, which is nice if you still like to see your phone’s color shine through the piece of the case that doesn’t cover it.

As with the Z Flip 3’s case, the buttons here are super clicky and a pleasure to use. They are made of the same powder coated rubber finish as the rest of the case. This has a cleaner, more prominent lip around the screen than what’s on the Flip 3’s case, but it’s angled inward so gestures aren’t difficult to perform on the phone. It’s even made from 50% recycled materials, so you can feel good about its more eco-friendly origins.

The latest is the Return of the Jedi case for the Google Pixel 6 Pro. I saved my favorite Star Wars movie for last, and the deal is pretty damn slick too. No, not smooth in the “slippery” definition of the word – far enough from it thanks to the very rubbery finish to the sides of the case – more like “man, this looks sick” kind of slick.

The sides are more curved thanks to the curved nature of the Pixel 6 Pro, and the lip around the screen only protrudes from the top and bottom of the case to prevent the screen from touching a flat surface if it falls face-first . The less defined lips around the curved edges of the display don’t interfere with gestures at all and are the shortest lip of any of the three styles of CASETiFY cases I have with me.

That Return of the Jedi logo on the back isn’t just a glue-on decal that will peel off in a month. Nope, this one is gorgeous, a raised embossed logo that has real dimension. It has a nice rubbery texture that feels great with the sides of the case and offers a grippier alternative to the flat plastic below the logo.

I also really appreciate the raised lip that goes all the way around the camera bar, also preventing it from landing on a flat surface if dropped. This lip is a hard plastic instead of a rubber, with the CASETiFY logo added to two of the corners. This case is made from 65% recycled materials, making it the greenest case of the bunch here today.

A case that can withstand the Force

CASETiFY’s limited edition Star Wars cases are the real deal. These aren’t cheap Star Wars cases with a simple sticker or decal attached to an existing case. On the contrary, the three types that I have in my possession are certainly worth your attention, especially if you are a Star Wars fan and need to be adorned with all things Force.

The biggest downside is the price, which at $65 is quite expensive for a phone case. Based on the build I’m willing to say that these will probably last longer than many cheaper cases and while that’s not much of an issue the official merch factor certainly comes into play for this price. Still, if you absolutely must have a great Star Wars case on your phone, these are the best you’ll find anywhere.