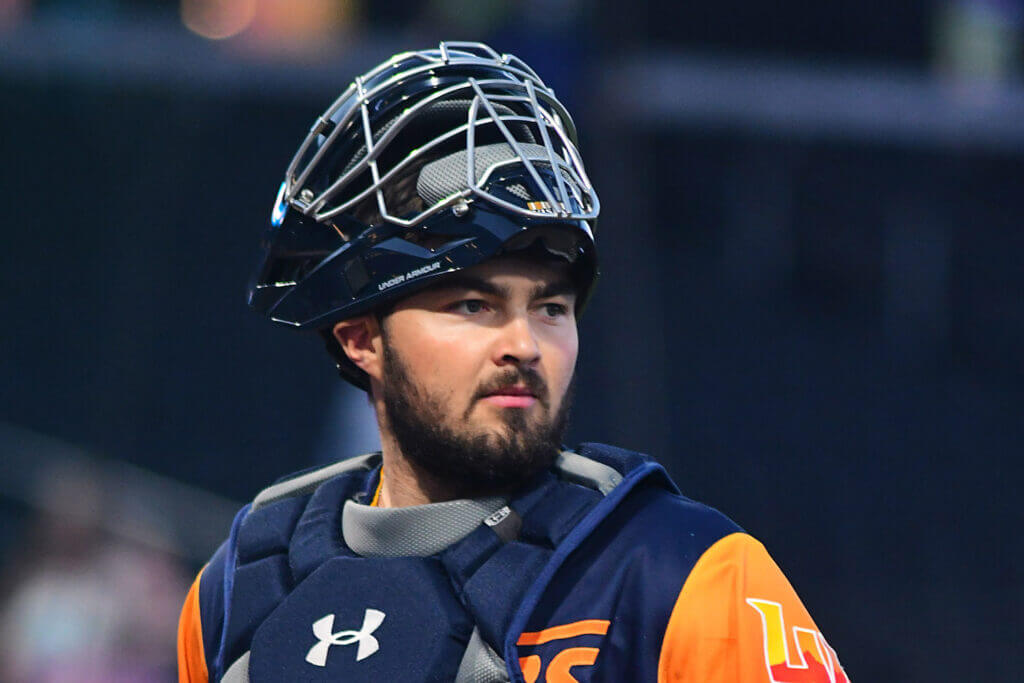 These guys are on fire

• Matt Olson may be gone, but Shea Langeliers is doing its best to help A fans get through it all. The former first-round pick and top prospect has been hitting hard all season at Triple-A in Las Vegas, but he’s gone supersonic this week. Over the past seven days, the 24-year-old wide receiver has batted .333/.402/.905. Stretch a little further and he hit five homers in six games, bringing his total to nine for the season. This includes a home run one night and a two-home run game the next. Langeliers walks almost as often as he punches, and his slugging percentage starts with a seven. For the season, he hits .316 with a 1,133 OPS.

Shea Langeliers hits her second homer of the night, her 5th in 6 games

• A portion of the yield in the Jose Berrios trade at last year’s deadline, right-handed Simeon Woods Richardson doesn’t rack up strikeouts, but he’s been stingy with opposing hitters nonetheless. The 21 year old Twins the prospect has made four starts this year with Double-A Wichita and has yet to allow a single earned run. In fact, he went at least five innings each outing and didn’t allow more than two hits in any of them. He keeps batters at a .101 batting average and .311 OPS.

Nothing but goose eggs for @WindSurgeICT pitcher Simeon Woods Richardson.

No. 7 @Twins prospect has yet to allow a run through four starts. pic.twitter.com/IAO3VmMed4

• By going 0 for 4 on Sunday, Cardinals perspective Nolan Gorman ended a 16-game hitting streak that had sustained him most of the season with Triple-A Memphis. During that streak, the 21-year-old infielder hit .385 with a 1.354 OPS and 11 homers, a mark that is tied with fellow Cardinals fielder Moisés Gómez for all-minor-league highs. Gorman’s 34% takedown rate is concerning, as is his 7% walk rate, but running over a bunch of taters will make up for a lot. Gorman is on track to surpass his already impressive total of 25 homers in 2021, and he’ll likely be on track for St. Louis before long.

Nolan Gorman takes exclusive possession of the MiLB HR head with his 11th dinger for the @memphisredbirds.

And what a blast it was for the @Cardinals‘ Lead #2! pic.twitter.com/MtDcRLfFcu

• The Reds leave for their worst start in franchise history. Look away! Need advice on where to look away? Can we suggest left handed Reds Andrew Abbott, who started his first full professional season on a tear. Drafted in the second round from the University of Virginia, the 22-year-old jumped straight to High-A Dayton to start the year and, if that continues, he might not stay there long. After four starts, Abbott has a 0.86 ERA and has struck out nearly 43% of the batters he has faced. He’s had double-digit strikeouts in each of his last three starts, allowing just one run in that span.

the @Reds‘ The No. 13 prospect recorded his third straight start with over 10K for @DragonsBaseball. pic.twitter.com/L48wXqLLHe

• Have you heard of Brandon Walter? It’s OK if you haven’t. He was a 26th-round draft pick out of the University of Delaware three years ago, and the draft doesn’t even last that long anymore. However, after strong results in A-ball last year, the 25-year-old southpaw is making a name for himself this season with Double-A Portland (Red Sox). He has made four starts and has a 1.17 ERA. He faced 85 batters and didn’t walk a single one, though he hit two. This is what it looks like when someone who was not a guy becomes a guy.

• There were a few notable promotions this week. After striking out 10 in five scoreless innings in his last outing with High-A Hillsboro, Diamondbacks left-handed Blake Walston was transferred to Double-A Amarillo, where he will join an absolutely stacked rotation. He takes a rotation spot vacated by another top prospect Drey Jameson – both pitchers were first-round selections in 2019 – who was sent to Triple-A Reno after running through Texas League hitters for multiple consecutive starts.

• Cuban import Yobert Sanchezwhich ranks as White Sox No. 10 prospect according to Keith Law, earned promotion to Triple A after hitting .353 with an .880 OPS with Double-A Birmingham. Sanchez has already found his footing at the new level, starting his tenure with the Charlotte Knights batting .385 in his first six games.

• They are back! Shortstop Tyler Freeman, Guardians’ No. 7 prospect, made his debut this week for Triple-A Columbus after undergoing shoulder surgery last year. Joining it at the Triple-A level are Blue Jays No. 4 prospect Jordan Groshansslowed down by an oblique wound in the spring, and old tigers first round Alex Fedo, who missed all of last year due to Tommy John surgery. In his first Triple-A start, Faedo stoked eight while allowing just four hits in five shutout innings.

Touching moment of the week

Jason Krizan was an eighth-round pick in 2011. Many of his peers are now longtime major leaguers or have finished playing. Krizan is neither, having held out in the minors for 11 seasons. During this time, he played 1,132 matches. He amassed nearly 4,600 plate appearances in the minor leagues. All without appeal.

That changed last week. After 11 seasons in the minors — and seven in Triple A — Krizan was called up by the Giants on Friday. His first two games were no-hitter, but then came the fifth inning on Sunday and a first-pitch fastball to the inside third of home plate. At 33, with his wife and young child in the stands, Krizan recorded his first MLB success.

After 11 seasons and 1,132 games in the minors, @JasonKrizan has his first shot in the major league 🙌 pic.twitter.com/KJVhmewSwh

Read all about him by Andrew Baggarly here.

Pieces of the week

• Diamondbacks Outlook Alexander Thomas gets up to hit a homer.

• New sailors farmhand Mason McCoy, traded to Seattle for cash just before the season, with a great play in the middle.

• Whether this circuit inside the park is a strong point or a weak point depends on your point of view. If you ask Lucas Dunnan eighth-round pick by the padres last year is the old one.

• Can a single pitch be a highlight? I’m so fascinated by how the Mariners 11th-rounder William Fleming moves that ball that I’m inclined to say yes.

See a piece we should include next week? Tweet them at me and Maria Torres.

• Tired of my words? Read some other people. Here are the minor league notebooks on the Cubs, Brewers and giants. Here is a story by Dennis Lin on 6-foot-7 Padres prospect James Wood and a piece by Chad Jennings on Boston’s Tristan Casas and Jeter Downs. And, uh, here’s more of my words, on The Diamondbacks’ top prospect, Corbin Carroll. Please start calling him the What’s Next Kid so I can feel good about myself.

• It was a week without a combined hit. First, three pitchers from the Giants’ High-A branch in Eugene, Oregon, pitched a seven-inning no-no. Congratulations are due to Nick Swiney, Cole Waites and Nick Avila. (More on that in the Giants notebook above.) Hours later, three Cubs prospects with Low-A Myrtle Beach — Walker Powell, Adam Laskey and Jake Reindl – combined for another no-hitter performance, this time in nine innings. (Eugene’s no-hitter was part of a doubleheader. Let the debates about its legitimacy begin.) Reindl’s celebration of the endgame is pretty amusing.

The Minors’ second no-hitter of the day, thanks to three @Cub Scouts prospects and @Pelicanbaseball: https://t.co/4CIPZvWaoh pic.twitter.com/Z2D4dPukcm

• It happened again. Midland RockHounds hitter Sunday Jordan Diaz fell on an automatic strike because he spent too much time outside the hitting box. Although it doesn’t seem to have dragged on for very long, these are now the rules in the minor leagues. Although this is not the first automatic strikeout in the minors this year, the reaction has been overwhelmingly negative online. But here’s the deal. The umpire was doing his job, and the batters will get used to it. Soon it will be instinctive not to think outside the box. Also, please sign my petition to adopt my name for this event: Pointé.