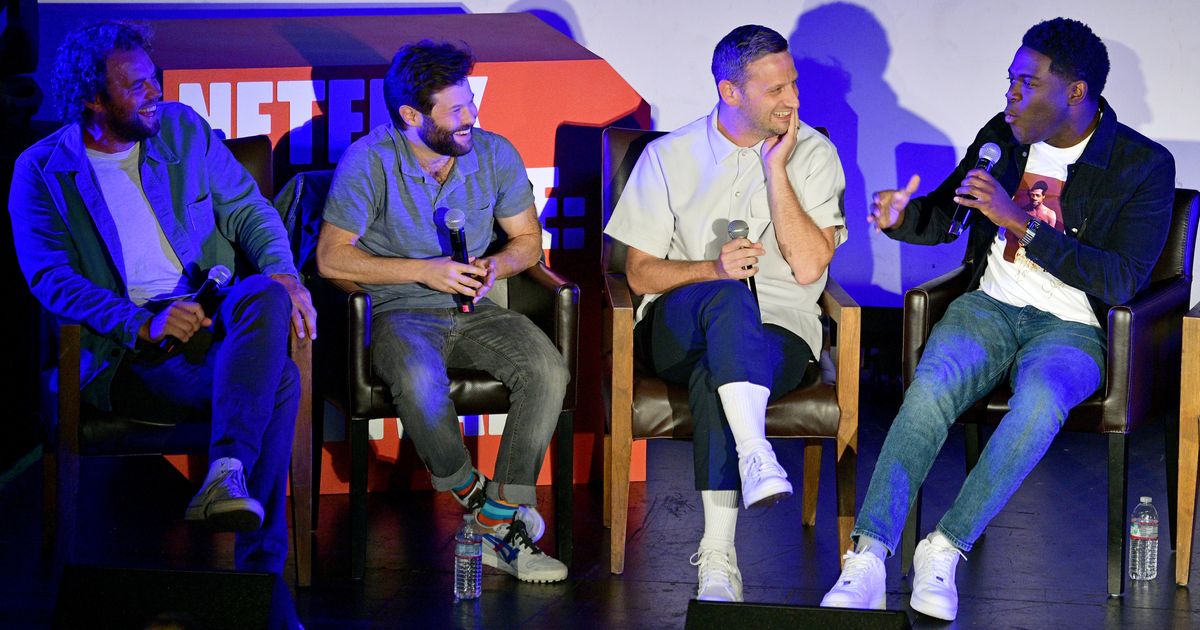 Obviously I think you should leave held a live show at a cemetery. No they didn’t flop any coffinand no skeletons came to life either, but buried sketches were unearthed at Hollywood Forever’s Masonic Lodge on May 6 as Tim Robinson and company performed at Netflix Is a Joke Fest. If the streamer needs goodwill (and let’s be clear, It is), then hosting an event for a series with such a hyper-vocal, super connected fan base was a smart decision. Earlier today, Netflix announced that it was renew the show for a third seasonso the mood was festive in the 150-seat venue, which quickly filled with fans, including at least one I saw wearing “Brian’s hat.”

When tickets for the show were released in December, they sold out between Three and five seconds, depending on which disappointed fan you ask, so everyone in the crowd was either very lucky, very skilled at clicking the second a ticket dropped, or very working at Netflix. The show opened with the projection of the “Has this ever happened to you?” sketch, only it was a beefed up cut full of even more ways for Team Turbo to terrorize the poor guy in the video. This time around, they mow her lawn to look “like a shaved cat”, throw a disruptive party on her lawn because “beach music is supposed be loud,” and proceed to pretend the guy is dead as they trample all over his house. It really gives the fart gagged toilet some context.

I assumed a I think you should leave showing in a festival setting meant sketch comedy, but instead, with the help of Brooks Wheelan, Tim and series co-creator Zach Kanin presented and analyzed seven filmed sketches: four that didn’t did the final cut of the show, and three extended director’s cuts, such as the Turbo Team opener. But because Robinson and Kanin are the people they are, they couldn’t just play straight; they made it an erased competition. For each skit, they would call a guest judge onstage to decide whether or not it should have been cut, with Tim looking coy about the ordeal the entire time.

If this show accomplished anything other than making grateful audiences laugh and Tim blush, it made a case for Netflix adding a “bonus features” tab to shows like ITYSL, because those extra sketches and scenes, and accompanying commentary, would feed fans so well between seasons. And until they listen to me, here’s a rundown of the sketches you might have missed, who judged them, and what their verdicts were.

Tim introduced the first guest judge, Sam Richardsonsaying “He’s my best friend in the world”, which, awwww. The sketch is a classic Tim setup: after explosively and falsely baffling potential business partners by stealing his wallet (he just left it at the table), he sinks into a deeper hole trying to play it as a joke (riffing, he calls a wallet “a thin bank box”). Sam’s verdict was “Cut it”, but he was only joking, and Tim revealed the reason the skit didn’t make it to the show: because “the only thing that made us laugh was is how long I haven’t spoken”. It’s true that he doesn’t speak in this skit for a full minute as the camera locks onto his stunned, mortified face… and it’s great TV.

Before playing the next video, Tim described an unaired skit he wrote for Jon Hamm on SNL about a wedding DJ who is also the owner of Jurassic Park, learning that the dino escape is in progress while he is a DJ. This sketch is not that. In “Dino Guy”, Tim is an elder who is furious that a little boy sitting at a table next to him is saying inaccurate things about dinosaurs while he is playing with his toys. Also, the other thing about this guy is that he thinks “spunk” means “poo”. Guest Judge #2 Patti Harrison reviewed the skit thus: “Child actors, they grow up to die, like, super early.” Tim said he hoped the boy would leave the company ‘so it wouldn’t happen to him’, to which Patti replied: ‘I saw his coffin outside. They gave him a long one – like ten feet long.

Somewhere out there, a seven-minute version of “Little Buff Boys” gets lost in an external hard drive, stolen from the world. What a bull harvest! The longer version lets you really sit in the discomfort of a Little Buff Boys competition taking place at a corporate conference. We learned why Sam’s hair looks so weird in this sketch: because there’s a full reveal of baldness underneath that’s been cut off. After the skit, Sam said the kids in the skit had no idea what was going on during filming; while the director said to them: “Now, step on your feet! Going for a walk!” they weren’t sure if this was an actual Little Buff Boy competition or what.

The guest judge for this skit was “Level One Improviser Bruce Buckles”, who in his glasses and Hawaiian shirt pretended for everyone on stage and talked about his experience doing an entire class in Second City . Adding this character kind of turned the panel itself into a loose sketch, as it had Tim and Sam cracking up for the rest of the night. Who was this mysterious dorkus in character? We did some research and considered him Tim and Sam’s old sketch buddy, AP Organic actor-screenwriter Brendan Jennings, who has been doing this character for more than a decade.

Simple, brilliant, never done before, revolutionary, everything you would expect from a ITYSL sketches: Tim and Sam are background actors on the set of a horror movie, but Sam ruins the takes by overdoing a “stinky” gesture (think Season 1 choking scene) when Tim places a prop burger in front of him, causing the two to argue through their teeth while miming-acting. It’s an awesome physical comedy with a hilarious beat when, in another take, the slasher stabs an extra next to Sam, and he just bends over, sniffs the body, and makes the stinky face again. Guest judge Kerwin Frost said it reminded him of when he played Weeknd’s DJ as an extra in Uncut Gems and all the background actors made their own schtick. Apparently, the sketch was cut because the “arguing with silly voices through their teeth” thing made it hard to understand what they were actually saying.

Tim plays a guy who’s told to fake a call whenever potential customers ask a question he doesn’t know the answer to…only he just doesn’t know how to fake a phone call. If there were any Emmys for frowning, this sketch would be swept away. The judges all honestly said they liked the sketch but thought the ending was weak, except for Bruce Buckles, who pays $450 for Zoom sketch lessons from a guy named Tedd Turner (with two D‘s) in Arizona. He asked, absurdly, “How much improvisation goes into your writing?” Brooks replied that there was almost no improvement in filming; it all comes from Zach and Tim’s noggins.

It’s also the moment on the show when Brooks – who started off by saying that night was about to get to the bottom of Chunky’s case – revealed an exclusive ITYSL secret: Zach Kanin was the guy from the chunky combination. This revelation made the already shy Kanin even more shy, but he didn’t go behind the scenes and break Brooks’ laptop or anything.

The highlight of the evening was the final sketch, a three times longer version of Funeral Organist Piece by Fred Willard from the first season. The thing has a whole back half that’s been cut off, starting with Fred warning funeral attendees of “75 separate places where plates will be thrown”, the shards giving a mourner a bloody lip. Then he throws a black sheet over his head and the organ so he can tune it while the deceased’s daughter gives a eulogy, thinking it will block the sound, even though he thinks it’s a mess that there is “a perfectly clean skeleton”. in the coffin and the pastor doesn’t want him playing “clattering sounds”. Villard is so funny in this skit and had the audience screaming, and the whole silly funeral concept felt very poignant afterwards his death in 2020. Guest judges ruled favorably on all of the sketches, but Netflix really should release this one.

Concluding the event, Tim, Zach, and Sam didn’t have any new information on season three, but Tim told fans that they “really sign for us a lot — it’s honest.” Kerwin asked if this was the part where they answered questions from the crowd, Brooks said “No, it’s over”, and it was an abrupt end in ITYSL sketch mode. Unless they’re shooting this thing as some kind of promotional road show, they should really upload those deleted sketches and scenes by season three. If nothing else, it made us want to see Bruce Buckles in a skit. It was the second most fun you could have on a Friday night, after riding shotgun in your car driving through town like explorers going 65sure.