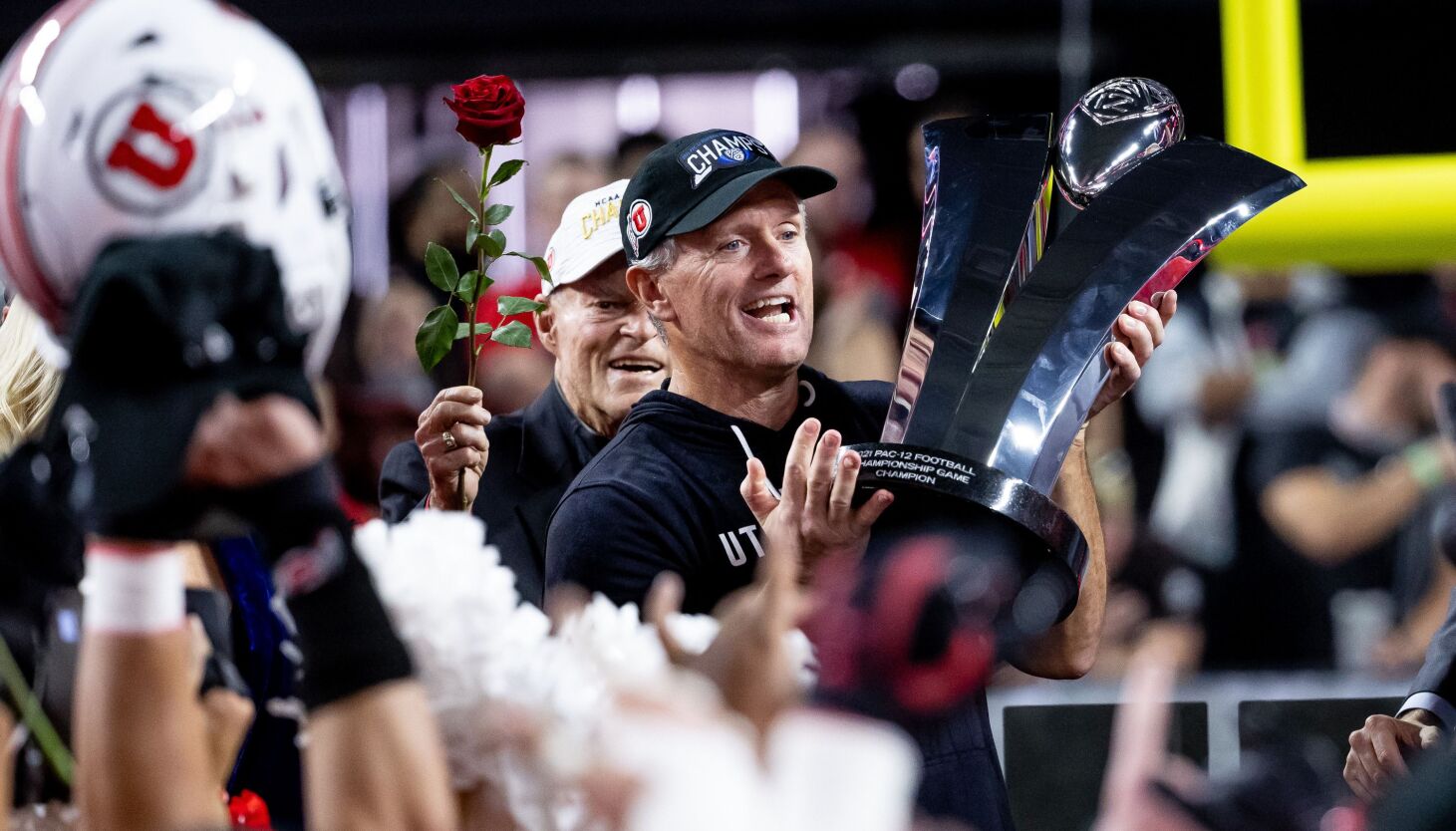 It’s kind of a new era for Utah’s football program.

A decade after joining the Pac-12 Conference, the Utes won their first Pac-12 championship and earned their first Rose Bowl berth last season.

Utah, which has qualified for the Pac-12 Championship Game three of the last four years, should not only be the favorite to win the league again, but could compete for a spot in the college football playoffs.

In his far too early ranking of the top 25 published last weekend, ESPN placed the Utes at No. 4.

No doubt, in the Pac-12, Utah, which finished No. 12 in the Associated Press final rankings in 2021will be considered the program to beat.

“It’s understanding that we are the team with a target on our backs. Everyone is coming to pick us up. We are no longer that underdog team where they neglect us,” said Utes wide receiver Devaughn Vele. “Now we’re one of those powerhouses and when they think of the Pac-12, they think of Utah, not just USC or Oregon or Washington.

“It’s just about understanding that role and being able to step into the spotlight and not walk away from it. It’s about keeping that confidence and understanding what we need to do while still maintaining the same energy we had last year. It’s 22% better. It’s understanding our role. We’re a powerhouse now in the Pac-12. We just have to keep it that way.

The Utes are proud to be the defending Pac-12 champions, but they certainly aren’t satisfied.

“We are the champions and we have to act like the champions. (Defensive Coordinator Morgan) Scalley always mentions after practice that we are the ones who have the target on our backs. It’s something to protect,” said Devin Kaufusi defensive tackle. “We are on the throne and we have to protect it. Understanding the great feeling of being the champions, we must continue. We know we are capable. It’s really encouraging and it gives us that confidence and that encouragement to work harder and go even further.

The Utes kick off the 2022 season Sept. 3 against SEC opponent Florida at 88,548-seat Ben Hill Griffin Stadium — popularly known as “The Swamp” — in Gainesville.

The fact that Utah faces such a tough test in the season opener should provide plenty of motivation during the summer.

“There’s no easing in the season. It’s down to Florida, in ‘The Swamp,’ in Game 1,” said Coach Kyle Whittingham. “It’s not like we have the luxury of turning things around and going through some growing pains at the start of the year. We have to be ready to go from (the beginning).

Even though Utah faced a junior high school team in Game 1, Whittingham would never allow his team to wallow in complacency.

“Definitely not. There’s no room for complacency,” Vele said. “Coach Whitt would never allow that. I would never want to show even a hint of complacency in front of this man.

Quarterback Cam Rise said that despite being the defending Pac-12 champions, the team still has a chip on its shoulder.

“You have to go out there and attack him. That’s what the coaches told us to do. Yes, we won it last year and that doesn’t mean this year’s trophy is in our case right now just sitting there,” he said. “We have to go out there and attack it and treat it the same way we did last year so that we go about it the right way and make sure we get back to the Championship and we go win it.”

“We talked about it as a team. The idea is not to defend (the title). We will attack it again,” said tight end Dalton Kincaid. “If we defended him, I think we would back down. We’re going to lower the throttle and start over. We know we’re going to get everyone’s best shot every week. We can not wait to be there.

Left tackle Braeden Daniels said the team’s mindset for next season is simple.

“We know we won the Pac-12 last year. We know it’s not our trophy this year – it’s something we have to go after,” he said. We know it won’t be easy and we have to be physical every week, if we want to get what we said we want, we have to come here and improve every day.

Vele said the key to repeating as the Pac-12 champion is “keeping the same mentality” as last year.

“We have to accept what the coaches tell us,” said tight end Munir McClain. “I think we can repeat the same as long as we do what we have to do.”

Another trip to the Rose Bowl is something else that will motivate the Utes through the summer.

“It was a cool feeling to play and be there. We want to get that feeling back,” Kaufusi said. “We loved it so much, we want to go back.”

Now that spring training is over, here’s where the Utes’ offensive, defensive and special teams stand.

Much of the optimism surrounding the 2022 campaign can be attributed to the return of Rising, the Utes’ star quarterback.

“We know Cam is our man. We just have to get those guys working behind him and see what happens,” Whittingham said. “We have an all-conference first-team quarterback returning to lead us. This is a huge plus point for us.

“With this guy you already know what he can do for our offense,” Daniels said. “It’s really exciting. You just want to go out there, block for him and give it your all.

Offensive Coordinator Andy Ludwig enjoys working with Rising, who can do damage with his arms and legs. And he has experience.

“He’s been there. This is his fourth year in the system. He is everything we are looking for in this type of experience in this position. His track record, the things he’s been through – the injury, getting beat up, fighting… the guy exudes confidence,” Ludwig said. “He rallies all the troops in attack and is highly respected throughout the team. He is invaluable on the ground in terms of tangible assets. Absolutely invaluable with its intangibles.

Rising has plenty of weapons at his disposal, including tight ends Kincaid and Brant Kuithe; running backs Tavion Thomas and Jaylon Glover; and receivers Vele and Solomon Enis.

Whittingham said Vele’s emergence is “significant for Cam. He has a guy he has great chemistry with. … If Devaughn can stay healthy and if he can keep making the plays he’s been making all through the spring, and continue that into fall camp and into the season, he could have a great year for we.

While the Utes have lost some key offensive linemen, they are returning a strong core, as well as young talent.

“We have identified eight guys who are absolutely ready to play. That doesn’t include Jaren Kump or Paul Maile, who weren’t available for spring football. We think we’re going to have a strong 10-man squad that we can rely on,” Whittingham said. “We have a front five that will play together from the start. We will have a much better lead than last year.

“Last year we had a lot of injuries up front and we were shuffling the cards seemingly every day, especially at fall camp. If we can stay healthy, this O-line can be ready to roll and be very productive in Game 1. »

linebackers Devin Lloyda draft first-round NFL draft pick, and Nephi Sewell have moved on, but Utah has plenty of returning players and talented newcomers on the defensive side of the ball.

Utes to benefit from Florida transfer linebacker Mohamed Diabatewho hasn’t taken part in spring drills as he recovers from injury, but is expected to make a big impact on defence.

“He’s already played at an elite level in the SEC,” Scalley said. “A lot of it for him is about mastering the terminology and understanding our scheme and our culture. He loves her and we love her.

Whittingham was impressed with the freshman linebacker Lander Bartonthe younger brother of Cody and Jackson Barton.

Utah had a handful of defensive backs sidelined in the spring due to injuries. But Whittingham is confident high school will be a strength next fall.

“At the end of the day, we’ll be pretty good in high school. Cole Bishop is going to be one hell of a football player for us,” he said. “We have a lot of talent there. We just need to get these guys together and get ready for fall camp.

If there’s one thing that keeps Whittingham up at night, it’s special teams.

The Utes no longer have an Extraordinary Return Specialist, Great Britain Covey, and they struggled at times last season in kickoff return coverage. They also had a few blocked punts.

“Special teams are something until we solidify it completely, that’s a concern,” Whittingham said. “It can’t be a one-time thing. Each group of positions is doing quite well. The main problem at the moment is the special teams.

Over the summer, Utah plans to continue making improvements as it seeks another Pac-12 championship.

“Finding those little details that we can work on will really make a difference to the season,” Rising said. “We have been so productive throughout the spring. We need to make sure we build on it and don’t back down during this time.