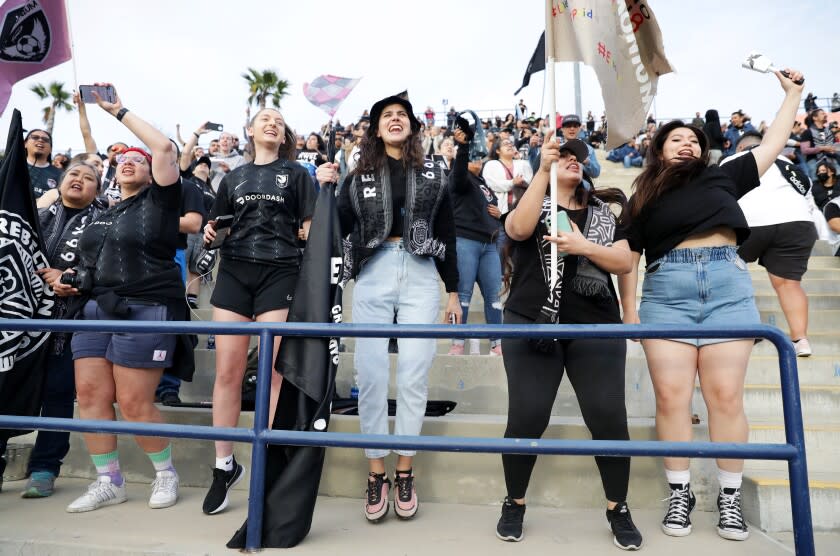 It has been 13 years since Angelenos was able to support a local team in a women’s professional soccer league.

While two Major League Soccer clubs call the Los Angeles area home, the last time the city hosted a women’s team was in 2009. The short-lived LA Sol played at the former Home Depot Center in Carson , but folded after just one season.

Fans at Banc of California Stadium will witness the official return of women’s soccer to Los Angeles on Friday when National Women’s Soccer League newcomer Angel City F.C. takes the field in its inaugural game against the North Carolina Courage.

The expansion team is backed by a group of nearly 100 investors that include A-list celebrities Natalie Portman, America Ferrera and Eva Longoria, as well as 13 former United States Women’s National Team players. The investors — and $35 million in sponsorship deals — come at a time of growing fan interest and a growing movement to elevate women’s sports.

As an LA Sol player, Shannon Box always knew she wanted to eventually help develop the women’s side of the game. Now the former USWNT midfielder and soon to be a member of the National Soccer Hall of Famedoes so in his hometown as an investor in Angel City FC.

“I think what’s happening right now all over the world, especially in the United States, is that the focus is on women, women’s sports, women’s equity, equality of compensation,” Boxx said.

Success on the international scene

Angel City enters its inaugural season as interest in women’s sports continues to grow around the world.

Last week, a UEFA Women’s Champions League semi-final broke an attendance record for a women’s game. A record 91,648 fans watched the match between Barcelona and Wolfsburg at Camp Nou in Barcelona, ​​Spain.

In the United States, NWSL attendance was up before the pandemic. The league also saw attendance increases during the years the USWNT won the FIFA Women’s World Cup in 2015 and 2019.

“You’re starting to see more and more fans wanting to come out because the quality is so good,” Boxx said. “I look at the players now compared to when I was playing, and we were amazing back then and now the quality is improving so much.”

Global competitions like the World Cup and the Olympics provide players with a great stage to connect with a wider audience. Players, including Megan Rapinoe, Alex Morgan and Christen Press, have become household names and built their own brands by connecting directly with audiences through social media.

This has helped change the business model in the sports world, especially for female athletes, said Ceyda Mumcuassociate professor of sports management at the University of New Haven.

“Historically, the business model has focused on leagues and franchises, but in the new business model, it’s more athlete-focused than team- or league-focused,” Mumcu said.

In many cases, athletes have more social media followings than the teams and leagues they play for.

“Individual athletes generate more of the business case than the team,” added Mumcu.

Angel City’s Christen Press and Julie Ertz, who is not playing this season because she is having a baby, each has social networks that rival the NWSL and the club. And San Diego Wave FC’s Morgan has more than four times the following of the Women’s National Team, which has nearly 5 million fans across various platforms.

But followers and posts aren’t everything.

Even though some players have larger audiences than individual NWSL teams, clubs still generate more online engagement as they post more frequently. Angel City FC leads the league in post commitments, followed by Portland Thorns. The LA team received 6 million interactions and video views, followed by the Thorns with 2 million.

Although quadrennial events like the World Cup and the Olympics are great for visibility, they are not enough to sustain the sport. It requires an energetic and motivated fanbase to attend game after game.

“I believe the national team has created so much success, and that now trickles down to the league because you want to watch them on a daily basis,” Boxx said. “Instead of just every four years, you now have the chance to watch all these great athletes…every weekend.”

A business run by women

As the fanbase grows, so does the pool of potential sponsors and investors.

By March, Angel City FC had secured more than $35 million in sponsorship revenue. In February, the food delivery service DoorDash has signed an agreement with the club so that its logo appears on the team’s shirts.

Rather than seeing a sponsorship as a charitable donation or a “cause”, donors see it as a good dealsaid Julie Foudy, two-time FIFA Women’s World Cup champion and ESPN analyst and commentator.

“They see this as an entity that reaches a level (demographic) that they really like … and so they are coming in large numbers,” Foudy said. “And I think that’s just a lesson for women involved in professional sports not to undersell themselves and bet on women and believe in them.”

As an investor, Foudy was attracted to the project because it is predominantly owned and run by women. And she is not alone.

Angel City attracted the largest group of investors out of the 12 NWSL teams. The list of backers includes names from Hollywood, music, technology and other sports icons such as Serena Williams and Billie Jean King.

Angel City isn’t the only team to add a diverse roster of investors to its board. In 2021, the Chicago Red Stars followed suit by announcing their own extended ownership group.

So far, Angel City have played six pre-season games in the NWSL Challenge Cup, where Foudy enjoyed the enthusiastic support of supporters and the team’s six supporter groups. Foudy, who played for the San Diego Spirit from 2001-2003, also predicts a future Southern California Derby between the San Diego Wave, also a new expansion.

“This thirst for [having] women’s soccer in Los Angeles is great,” Foudy said. “Then having a team in San Diego as well…I feel like those are two gifts given to Southern California.”

Angel City start their first game of the season against Courage on Friday at 7:30 p.m. So far, the team has sold over 15,000 subscriptions and, as of Thursday afternoon, single-match tickets were still available.